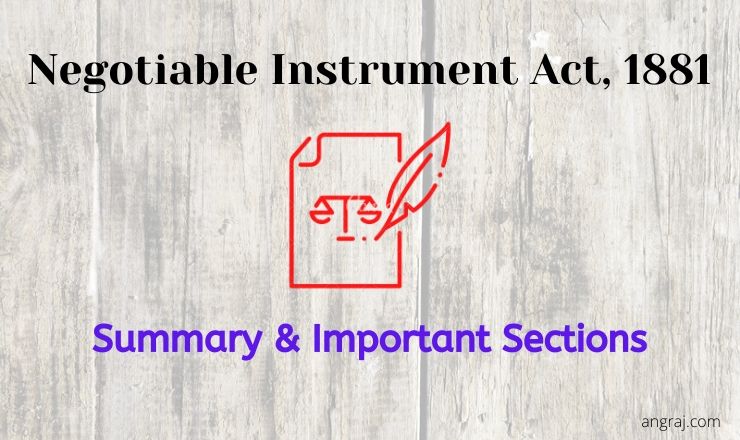 Negotiable Instrument (NI) has been defined under section 13 of Negotiable Instrument Act, which means and include Promissory Note, Bill of Exchange & Cheque payable to order or bearer. So, before going the details of the types of negotiable instruments, let us start with the term Negotiability.

Instruments which are transferable but if the transferee doesn’t get a better title than the transferor is also not a negotiable instrument as per NI Act such as Railway Receipt, Bill of Lading, Warehouse receipts etc which are termed as Quashi Negotiable Instruments.

Types of the Negotiable Instruments

As per Section 137 of Transfer of Property Act: Documents related to Title of Goods like Railway Receipt, Bill of Lading, Warehouse receipt. (Airway Bills are not treated as Negotiable instruments).
As per Practice: Govt. Promissory Note, Treasury Bills, Certificate of Deposit, Commercial Papers.

Under section 4 for NI Act, a promissory note is an instrument that contains a written promise (unconditional undertaking) signed by one party to pay another party or his order a definite sum of money, either on-demand or at a specified future date.

A maker/promisor signs Promissory Note as in the following example with the date and stamp:

A promissory note typically contains all the terms pertaining to the indebtedness, such as the principal amount, interest rate, maturity date, date and place of issuance, and issuer’s signature.
Promissory notes require stamping as per the Indian Stamp Act.

Parties of a Promissory Note:

There are basically two parties in Promissory Note:
1. Maker (Promisor): Who promises to pay the amount.
2. Payee (Promisee): To whom the amount is payable.

There are two types of Promissory Notes:

The essential features of a bill of exchange are:

 A Bill of Exchange must be in writing.
 It is an unconditional order to make payment a certain sum to a certain person.
 The maker of the bill of exchange must sign it.
 The date on which payment is made must also be certain.
 The amount mentioned in the bill of exchange is payable either on-demand or on the
expiry of a fixed period of time.
 It must be stamped as per the requirement of law.

Parties to a Bill of Exchange:

In the instrument Bill of Exchange there are two parties (i) Drawer & (ii) Drawee.

Drawer: The person who orders to pay. He is the person who is entitled to receive the money (i.e the Creditor or seller). He is required to sign the bill and send it to the drawee for acceptance.

Drawee: Drawee is the person on whom the bill is drawn. He is the person who owes the money and is directed to pay i.e the debtor or buyer of goods. Since a minor can‟t incur any liability, he can‟t be a drawee. The drawee becomes acceptor on acceptance of the Bill of Exchange for payment.

Payee: The person to whom the money is payable. In most cases the drawer of the bill is himself the payee.

Acceptor for honor: When a BE has been noted or protested for non-acceptance and any person accepts it for honor of the drawer or endorsers, such person is called as acceptor for honor.

Types of Bill of Exchange:

Following two types of Bill of Exchange exists based on their nature, period etc.

Demand Bill: Bill of exchange payable on demand or at sight or on its presentment and if no time is specified.

Usance Bill: A bill of exchange payable after some time at a future date.

Foreign Bill of Exchange (Section-12): A bill that is not an Inland Bill. A bill which is not drawn in India or made payable in India. The following bills may be classified as a foreign bill:

(i) A bill drawn in India but payable outside India by a person other than an Indian resident.

Generally, a foreign bill is drawn in more than one set to overcome the loss in transit while sending for acceptance. The accepted copy received first becomes original and after that, the other copies are treated as cancelled. These copies are called VIA.

Documentary Bill: Bill accompanied by a document of Title to Goods like Railway receipt, bill of lading etc.

Clean Bill: Bill which is not accompanied by any document of Title to Goods.
Accommodation Bill: When a bill is drawn for other than a trade transaction and issued without consideration is called accommodation bill and dealing with such bills is termed as Kite Flying.

Hundi: These are a type of Bill of exchange drawn in vernacular language as per the local use. A Hundi which has been paid up and cancelled is called Khokha.

Dishonor of a Bill of Exchange:

A Negotiable Instrument can be dishonoured either due by Non-acceptance or Non-Payment. Upon dishonour, the holder should I) Give notice of dishonour to all prior parties i.e endorsers and II) get the Dishonored bill noted/protested.

Noting: On dishonour of a bill or Promissory Note, the holder may get it noted by a Notary Public as per Section 99 of NI Act. Noting is not applicable for Cheques and it is not compulsory for Inland Bills. Further, the right of a holder is not affected by not getting the dishonoured bill noted by a notary public.

Protest: It is dealt under Section 100 of the NI Act. A protest is a certificate issued by a Notary Public containing the facts of dishonour.

The ambiguous instrument is an instrument which is maybe due to faulty drafting is drawn in such a manner that it can be treated as a B/E or Promissory Note.

The inchoate instrument is an instrument which is incomplete with respect to date, payee and amount. Holder of such instrument has the right to complete it. An instrument without a signature is not valid at all.

Difference between Promissory Note and Bill of Exchange

Following are the main differences between Promissory Note and Bill of Exchange:

As per section 6 of the Negotiable Instrument Act, Cheque is a Bill of Exchange, always payable on demand and the drawee is always a Bank. Apart from physical cheque, Electronic cheque and Electronic image of the cheque are also treated as valid instruments. No certain form of Cheque is given in the act. However, RBI has prescribed formats and features as per CTS-2010 Cheque standards, which has been made mandatory w.e.f 01.01.2013. (Banks had been advised to issue only CTS-2010 standard cheques/DD by 31st December 2012).

Parties to a Cheque

Drawer: The person who draws the cheque or the account holder.

Drawee: The Bank on whom the cheque is drawn or where the account is maintained.

Payee: The person named in the cheque or the beneficiary of the payment.

To facilitate Magnetic Ink Character Recognition based Cheque Processing, instruments passing through clearing are required to be issued in standard format and defined size of 8” x 3 2/3”.

MICR Cheques have three sets of numbers at the lower band of the cheque.

The transaction code, running from 01-99, out of which, Codes 01- 49 are reserved for debit instruments and codes 50 – 99 for credit instruments.

Difference between Cheque & Bill of Exchange

See in the following table the main differences between Cheque and Bill of Exchange: